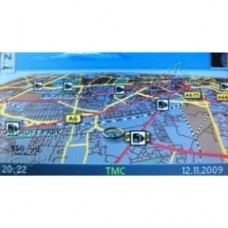 Please select your disc from drop down menu;

Features:
By regularly updating the digital road map, it is not only possible to reach every destination reliably, but choosing the best route can also save time and fuel, which is good news not only for the driver, but also for the environment. The quality of a navigation system depends entirely on how up-to-date its mapping data is. Every year changes are made to as much as 15% of the road network: new residential and industrial areas spring up, new roads, motorway intersections or exits are constructed, and service stations, hotels and other points of interest (POIs) are added or removed. Effortless navigation and punctual arrival at the destination can be guaranteed only if the map data is kept fully updated.